The information below was originally published by Dr. Roland Thomas in his BioNews newsletter Volume 14 – November 2015. We excerpt and adapt it here with his approval. Dr. Thomas is the President and Founder of BioAge, Inc., whose Scientific Advisor is Dr. Michael Kiriac, the inventor of BioSuperfood bio-algae concentrates.

Before the discovery of agriculture, mankind was divided by its diverse locality. The survival and size of each group was determined by its natural fertility or lack thereof, which was likely determined by diet and the general health of the group. Nowadays, everyone knows or has heard of someone who has gone through fertility treatments. It can be an emotional nightmare fueled by the promise of a treatment and the dream that pregnancy might happen. Alas, it is most often followed by shattered hope when the treatment is unsuccessful.

A Message of Hope

This is a message of hope for couples having difficulty getting pregnant. Over the last 15 years I have witnessed several stories of couples successfully conceiving, with the mothers having smooth pregnancies and healthy babies after they introduced BioSuperfood bio-algae concentrates to their diet. I will share here the extraordinary fertility research conducted by Dr. Michael Kiriac and some of the results obtained with mammals tested. It is my hope that, as fellow mammals, you will not hesitate to associate with these successes!

Fertility of a couple, a species, or a nation is a complex issue; there’s more to it than just spermatozoa (sperm cells) or eggs. It is an entire body metabolism that is involved from start, to delivery, to survival of the newborn child. Furthermore, one cannot address fertility without bringing up fecundity and viability.

Rather then detailing the entire physiological mechanism of fertility or demonstrating the specific mechanism of each result/benefit obtained during BioSuperfood animal research (of which there were many), I will describe here a particular metabolism that is fundamental to fertility and its relationship with BioSuperfood.

When consuming BioSuperfood, all mammal species were observed to have more vitality, increased energy, and strength. Their spermatozoid count, motility, and lifespan became more elevated on average by 400%. (Spermatozoid count is a function of energy, testosterone, cellular generation, and other metabolic factors. Motility refers to the ability to move spontaneously and independently; in terms of fecundity it describes the capacity of the sperm to reach the egg.)

One partial explanation of these results is associated with increased energy at the hypothalamus-pituitary axis (HPA) when an animal consumes BioSuperfood regularly on a daily basis. This increased energy at the HPA in turn supports more efficient absorption and distribution of the nutrients required for fabrication of Adenosine-Tri-Phosphate (ATP) energy within the mitochondria’s Krebs cycle metabolism, during which the conversion of carbohydrates, glucose, and fats into ATP occurs. (Animal and human cells contain on average 2000 of these mitochondria.)

As do millions of other cells throughout the body, sperm cells benefit from this increased energy, and looking at a sperm cell one can visibly understand that energy is required for its flagellum (tail) to propel it towards the egg. The key to the sperm cell motility is in its middle section (see diagram) immediately behind the head, that contains thousands of mitochondria. These mitochondria stand ready to respire sugars in the semen to generate the strong energy required for movement (motility) of the flagellum. 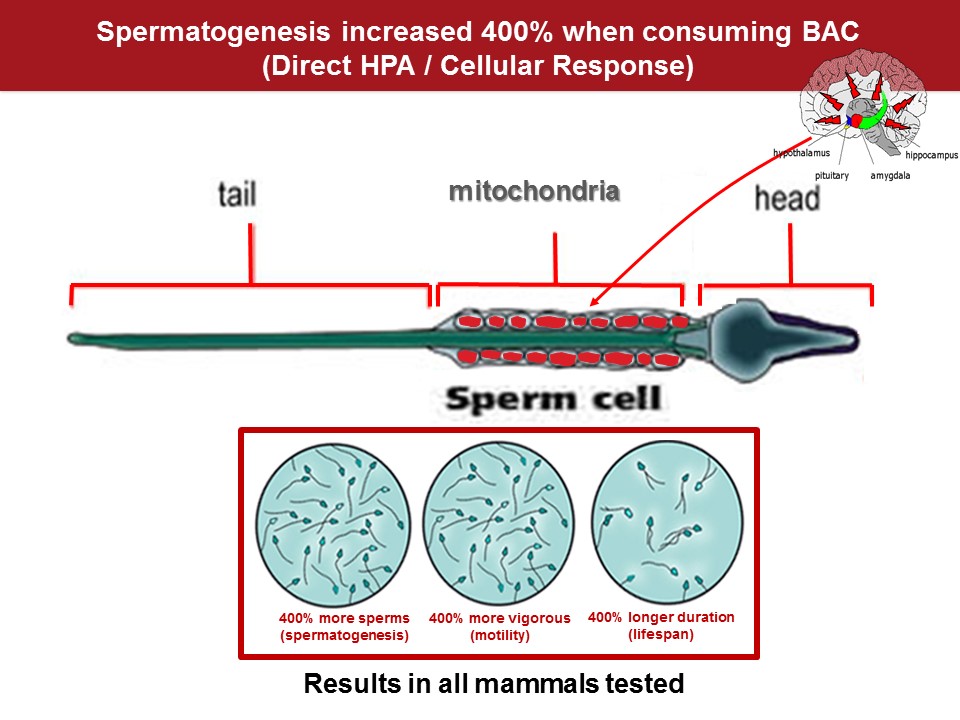 During several animal research projects, sponsored by the Academy of Science and the Ministry of Agriculture (nutritional science department) of the former Soviet Union, improved fertility was demonstrated in many small and large species, and proven in large trials with thousands of animals, even millions when considering research conducted on a Moldovan poultry farm with 1.5 million egg-laying birds. From the many benefits obtained during research conducted in Russia, I have selected below only those results or benefits having to do with fertility.

Poultry Research: in Moldova, from 1985 to 1995, a large egg-laying poultry farm plagued with cancers and low productivity was selected as a principal center for algae research. Besides 100% eradication of the cancers and an overall productivity increase of 20%, the following fertility-related benefits were observed:

Mink research: in Omsk, Siberia, mink farms totaling more than 10,000 animals were affected by various cancers and low productivity for this important industry:

Dog research: in this informal study at the aforementioned poultry research facility in Moldova, hundreds of dogs (mostly German Shepherds) used to guard the facility saw the following improvements:

Other Animal Research and Cases

Since BioSuperfood was introduced in North America in 1999, there have been several instances of improved fertility reported with animals, in some cases as anecdotal reports, in other cases as part of formal research projects: 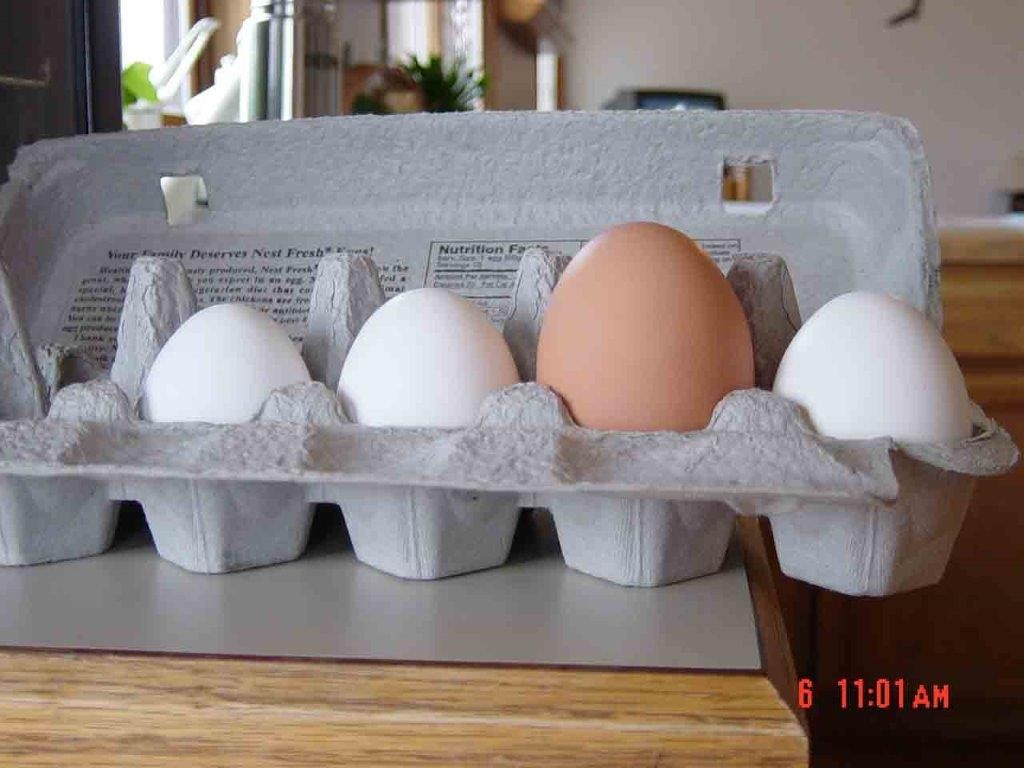 Introduce BioSuperfood in your life, as a great shortcut to brain health, as an aid in restoring cellular health, endocrine health, and reproductive. I recommend that you add BioSuperfood to your daily regimen; it is an extremely efficient food, undoubtedly the best wholefood supplement on earth, a blend of micro-algae with extraordinary nutritional values.

A Mother’s Testimonial: My Fertility Story with BioSuperfood

“I am writing this letter to you marking twelve years that I have been using the BioSuperfood products. I began using them in 2004 because I had been on birth control since college using Depo-Provera, and I had not gotten my period for over seven years. At the time it was a wonderful thing (not getting my period and all of the female things associated with it) but after going off the birth control, six months had passed and my cycle had not returned. After starting with BioSuperfood, within a few days I felt a difference in my energy, my regularity and my overall health. By the time I had been on the product for 3 to 4 weeks, what a difference. The energy level and overall health-well being were to me 100% better.  With the continued use of BioSuperfood, my cycle became regular in May. Not to mention the fact that as a teacher around children, many who carry hundreds of germs that I continually fight off avoiding those awful sicknesses I used to get prior to BioSuperfood.

“I highly recommend this product to any woman going through fertility issues or menopause and all the not fun side effects, hot flashes, no energy, not sleeping, and just the overall attitudes and emotional ups and downs. I can’t say enough good things about this product and I’m so very thankful for having been given the opportunity to take this product and experience the wonderful overall change in my health.” ~ Kate B., Denver, Colorado

*Statements have not been evaluated by the Food and Drug Administration (FDA). None of the products offered on this website are intended to diagnose, treat, cure, or prevent any disease.

After experiencing astounding health improvements from the use of BioSuperfood bio-algae concentrates, Owen & Regina formed Peak Health Supplements to share those benefits with as many people as possible in order to help them achieve peak health.

This site uses Akismet to reduce spam. Learn how your comment data is processed.

Learn more about celluar nutrition. Sign up for our email newsletter and receive a free eBook, too!

Stock up on BioSuperfood and save!

Take 5% off the purchase price when you buy any three (3) 180-count bottles of BioSuperfood, mix-and-match.*

Please note that you must be logged in to your account for the discount to apply. No coupon code is needed; the discounted price is calculated once you place the minimum quantity (3) in your cart.

Email notification request This item is currently out of stock. If you would like a notification when this item is back in stock, please enter your email address below.
All items are in stock and ship the next business day!
Shop now
This is default text for notification bar
Learn more
UA-110061582-1